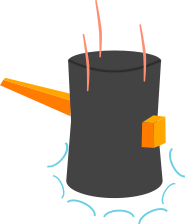 Smashing through your information & communication problems since 2021

We spend a lot of time talking about data, information, and knowledge - but do you really understand the differences between them?

Data is an abstracted, symbolic representation of…​ something. Like this:

Data by itself isn’t necessarily all that helpful. Sometimes we can infer or guess what data means based on where we found it or patterns that we’ve noticed, but that’s not always the best idea. One way of adding meaning is adding metadata - data describing other data - like headings on a table, for example. Especially when it comes to data on computers, that binary data is usually constructed from some sort of standard or protocol so that other programs & computers will be able to interpret it later. So, according to the ASCII text encoding standard, the above string of 1s and 0s represents the word "hello".

We call a system for storing raw data a database. There are a bunch of different computer database systems out there, or you can make your own with a text editor or spreadsheet software. You can also have real-world databases - think old-school library card catalogs or giant collections of filing cabinets full of business records.

(and yes, for the pedants out there, 'data' is technically the plural of 'datum' - but most normal folks treat 'data' as a singular thing)

Once we have data, we can assemble, filter, and summarize that data to form information. For example, we can store data in a database to record how many widgets a company sells every day, but we can design an information system to read the data from the database and produce some more useful stuff, like how much money we should have made from those sales, how many widgets we should still have on the shelf, and what our historical sales trends look like.

Most computerized database systems are also fairly functional, though not incredibly user-friendly, information systems. Typically, when I’m talking about an information system, I’m talking about a piece of software designed to read from a database (or, maybe multiple databases - a data warehouse or data lake) and provide a simple, graphical interface for that information & automated actions that can be taken to change the underlying data. Physical, real-world information systems tend to be much simpler than their computerized counterparts - organizing post-it notes on a wall or index cards in drawers, for example.

Building knowledge involves pulling information together to find patterns. Information is knowing that we’ve sold 100 widgets every week for the past 3 months, knowledge is knowing that our customers don’t do much shopping outside of those 3 months and that we shouldn’t go buy a bunch of widget parts that we won’t be able to sell until next year. Computers are getting better and better at generating knowledge - but knowledge primarily exists within the realm of people. Proper application of information systems can definitely make generating and applying that knowledge a lot easier, though!

Ready to start turning your data into information?